Introducing the king of the tropics! *Drum roll please!* The coconut has incredible nutritional value, produces a healthy, hydrating water and a flesh that can be creamed and added to delicious curries and desserts. Low and behold, there’s one other potential that coconuts have that people pay far too little attention to: Coconut oil.

A greatly under represented product, virgin coconut oil is good for the skin, the teeth, the body and the environment, making it one of the most organic and sustainable oils in the world. 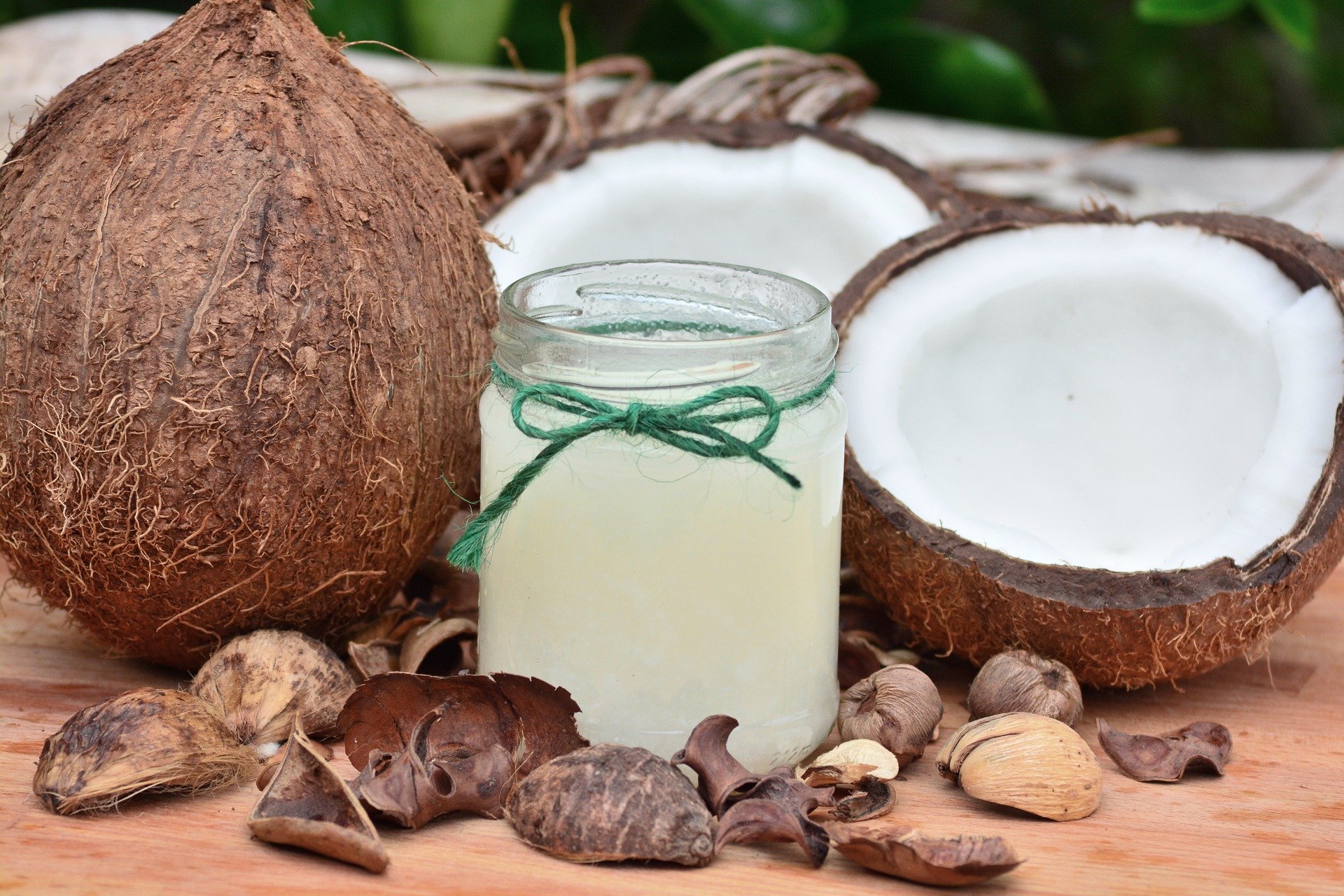 There are constantly new scientific reports in the news, telling us one thing or another about every product on god’s green earth. So much so, that we don’t know who or what to trust anymore! Some articles will have us thinking coconut oil is bad for us, others will proclaim it’s the best oil in the world. Which is precisely why I don’t expect you to take my word for anything other than an invitation to try something different and look into something new.

In writing this article, I’m coming from a place of personal research and one where I believe in the cultures of my ancestors. I think it’s high time we went back to our roots to find some answers to the health and lifestyle problems we have today.

But first, let’s take a little look into the oils we know best.

The oils we know and their effects on the body

We humans love to fry food. We’ll fry almost anything and everything and eat it all the time. Vegetable and seed oils are the common base for almost every meal that we consume but have we stopped for a minute to ask what the foundation of our food is actually doing to our bodies?

Foods cooked in large volumes of vegetable or seed oil are high in fats, calories and salt. Sure, maybe they taste good (subjectively) but oil is one of the biggest causes of high bad cholesterol, cancer, increased heart disease and obesity. The latter itself has its further dangerous effects including increased risk of stroke, osteoarthritis, type 2 diabetes and a higher mortality rate.

Some research suggests that oils are better than other forms of fats like butter and lard and that they do sometimes have their benefits but it’s the amount of oil that is being consumed which is concerning.

The most commonly used oils are the ones which are most tampered with during production and are high in polyunsaturated Omega 6 fatty acids. It’s these very oils that are paving the way for chronic disease and deplorably unhealthy populations.

Would you look at that, these are all the oils which you’ll find for the cheapest prices on the shelves. You’re paying for the quality of oil (rather the lack of) that will destroy your body. Not to mention the cheap production processes that pay no heed to environmental and labour regulations.

Another problem with these oils, is the rate at which they deteriorate. Both within your body, and as you’re cooking with them, these oils have the potential to form harmful compounds within their chemical makeup quickly and thus wreak havoc in your cells. Which is why you should never reuse the same oil more than twice when frying or cooking.

Oils which are low in Omega 6 and which are better for the health include:

These are the slightly more expensive oils on the shelves. They not only have a stronger chemical makeup, due to the quality of the crops used to make them, and the chemical processes used to manufacture them, but are made through organic processes in environments where the crops naturally grow. It’s safer to reuse these oils and they actually have nutritional properties.

With these two oils, you’re paying a higher price for quality and for your health, which is a bit ridiculous but should be something more of us prioritise.

Coconut oil is yet another product which used to be a ‘poor man’s option’ and is now all the up market rage, along with avocados, quinoa and sushi (yes, even sushi). But I hate to break it to you, coconut oil is not just a modern fad.

Island populations, like ours in the Seychelles, the Philippines, Samoa, Malaysia, Vanuatu and Papua New Guinea have been using coconut oil for cooking and body products for several hundreds of years. The organic lifestyles meant that the populations were healthy when it came to food consumption and people lived up to 100 years old.

Comparing this to the western world, where coconuts are considered an ‘acquired taste’ (fair enough) but where consumption of butter and vegetable oils are highest, as well as obesity and low life expectancy.

Due to the fact that coconuts grow naturally in tropical climates, historically, when the islands were colonised, large coconut plantations were created to export the nut and its by products. On the islands, the leaves of the coconut are used to make baskets, the water and flesh are consumed and the shells and husks can be used to make bowls, crafts, instruments and utensils.

There are two ways of making coconut oil.

The first is the crude form of coconut oil which is made from the dried coconut flesh otherwise known as copra. The coconuts are halved, the flesh is carved out and dried either in the sun for a few days, by hot air drying or in a kiln. The copra oil which is produced is a raw material which then has to be heavily refined and purified in order to produce the oil you see on the shelves for food consumption. Otherwise the oil is used to make beauty products, soaps, scents and more!

Coconut oil not made from copra is produced from freshly cut coconut flesh and does not have to go through a heavy process of refining. 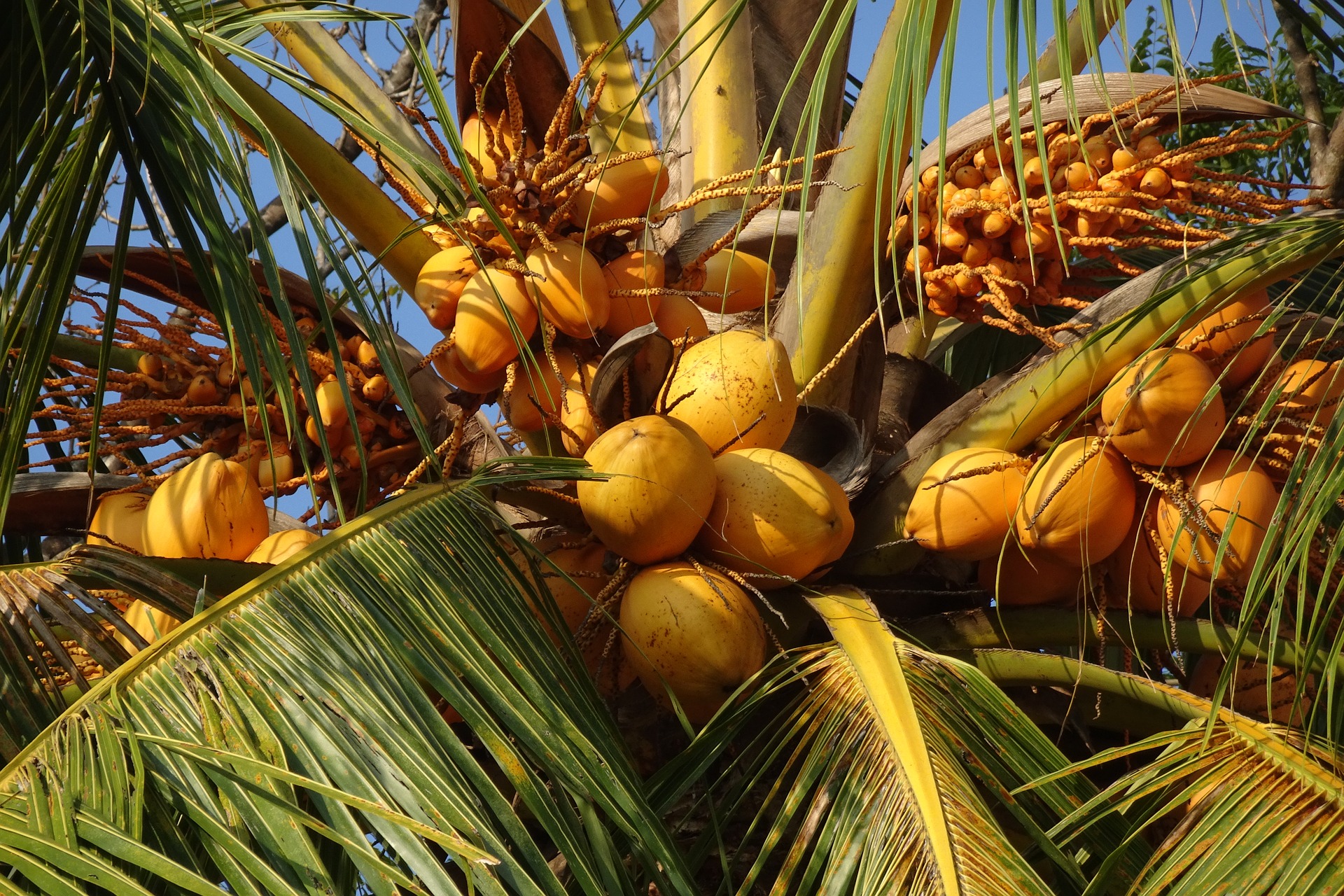 Coconut plantations already exist in tropical countries like the islands in South East Asia, the Pacific and the Indian Ocean. The plantations have been around nearly as long as the islands have. This means that there is very little reported about rainforests having to be cut down and land lost for coconut oil production, as there is with other vegetable oils.

This is especially significant when compared to the environmental impacts of the palm oil industry. Palm oil production results in massive deforestation (one of the leading causes of rising global temperatures), loss of animal habitats (most notably the orang-utans of Indonesia and Malaysia), the use of slash and burn techniques which create air pollution and land being taken from indigenous people.

Additionally, coconut planting, collecting and the processing of the oil creates jobs for locals in communities where unemployment is high. It boosts the local economy and makes optimum use of land without damaging the environment.

That being said, as with every industry, there will be bad eggs. So if you don’t live in a tropical country that produces the oil locally, your coconut oil would have incurred a carbon footprint through having to be transported worldwide.

How can you mitigate this? If buying coconut oil in the west, be sure to buy Fair Trade certified coconut oil so you’re assured that the farmers are amply compensated and take environmental factors into account during production.

But the problem remains that the demand for oil is increasing. No matter how hard we try to ensure that production is environmentally conscious, even by raising awareness about healthier oils, the industry seems not to have a choice but to produce enough to meet increasing demands.

And increasing production of anything will ultimately have it’s carbon footprint, and we’re going to have to pay the price eventually. From the looks of things, we’ll never be able to produce enough coconut oil or any oil to meet the wants (not the needs) of our ever growing consumeristic populations.

Coconut oil has a wide range of health benefits compared to vegetable oils and seed oils.

What’s been your experience with coconut oil? Personally I love the taste and smell of coconuts! Let me know what you think the comments below!

Sit back, grab some organic coconut oil, and let’s see what life has to offer us next.

Why not pin this for later?