Smack dab in the middle of the Indian Ocean, the Seychelles islands are home to some of the world’s most incredible treasures; plants and places, and it boasts a rich history and diverse culture from all over the world.

The Seychelles Islands are my home and I couldn’t be more proud of this little gem of a dot on the map.

If you’ve ever thought about visiting the Seychelles Islands but don’t know where to start, look no further than these pages! You’ll find the best Seychelles guides on where to stay, what to do, where to eat and how to live like an islander, so long as you stick around here with me. But first!

Here are 40 things I bet you didn’t know about the Seychelles Islands.

1. The estimated population of The Seychelles Islands is 97,000. You could fit all the inhabitants of the islands in the biggest football stadium in the world in the US that fits 107,601 people!

2. The Seychelles Islands are home to the largest nut in the world. The Coco de Mer can only be found in these exotics forests, can weigh up to 20kg and costs about USD360. The female nut resembles a woman’s bottom while the male flowering stem resembles a man’s genitals, which makes it a wonder of Mother Nature 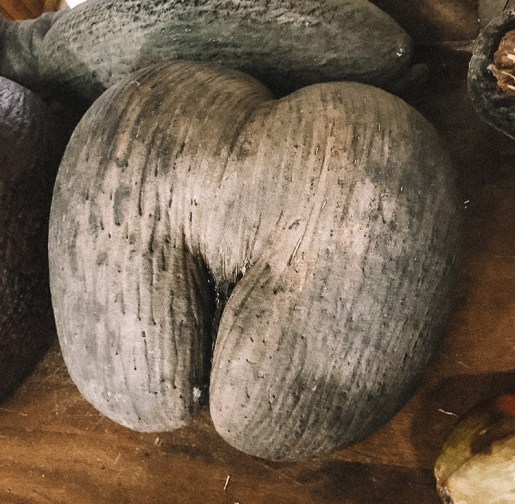 3. The Republic of Seychelles is a democracy, with an elected President and Parliament. We have a hybrid legal system, having retained some aspects of the French Civil Code and the English Common Law from the respective periods of colonisation. The islands got their independence from the English as recent as 1976

4.The islands are home to two UNESCO World Heritage sites; one at the Vallée de Mai Nature Reserve on Praslin Island and the other is the Aldabra Atoll, the world’s second largest coral atoll

5. The islands are a veritable melting pot of cultures, with people having backgrounds from all over the world, from the Asian and Oriental regions, to Europe and Africa. The islands did not have an indigenous people when they were originally discovered 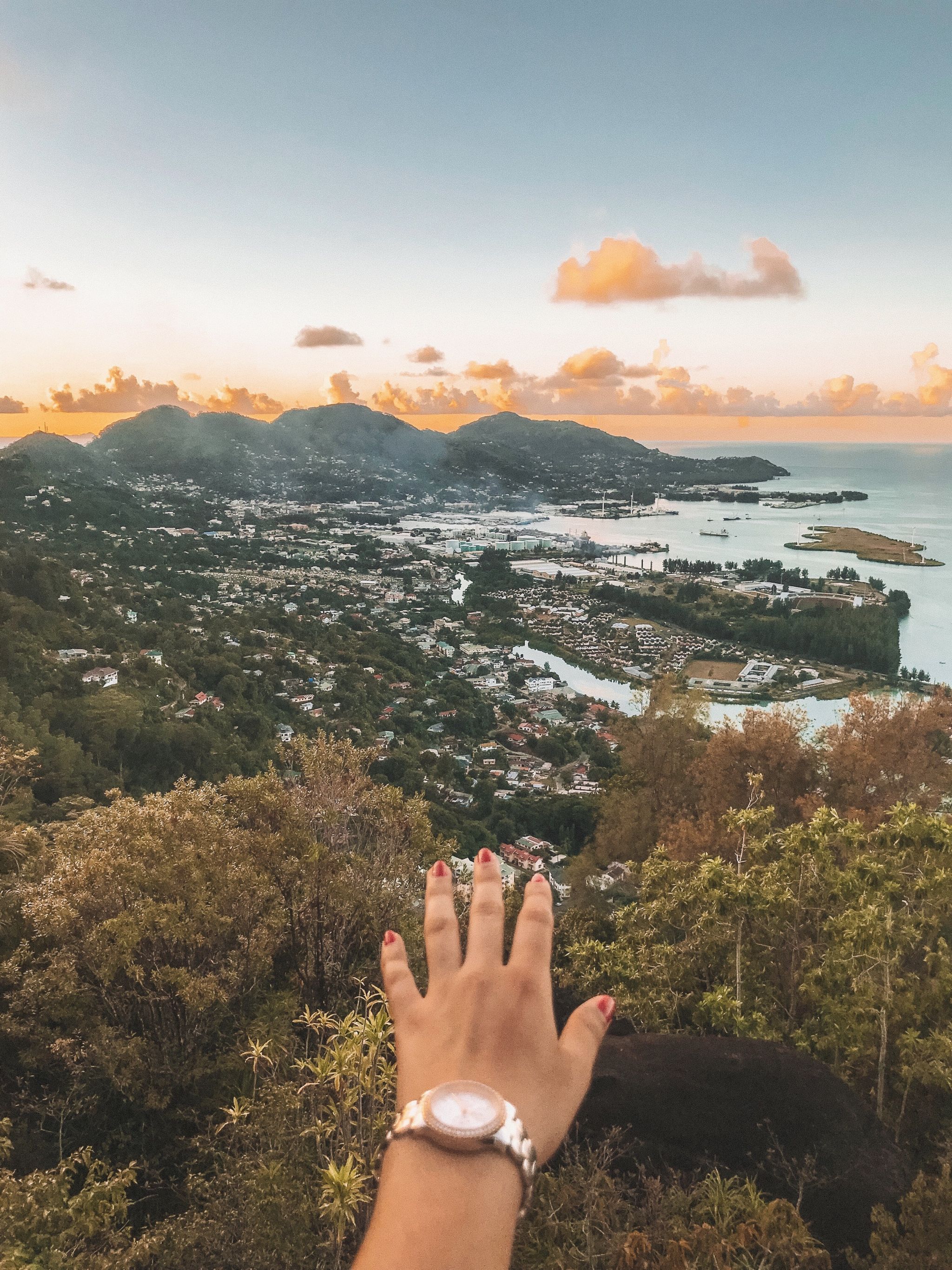 6. The islands are home to the third smallest species of frog in the world, the Gardiner’s frog, that can grow to a maximum length of 11mm, only as big as a grown man’s thumb nail

7. The local language is Creole, which has its origins in French, English and different African dialects. The national languages are also English and French

8. The moringa trees, which grow in abundance on the islands, are one of the world’s top superfoods and contains some of the highest levels of anti-oxidants, is rich in iron and is currently being researched as part of treatments for cancer. The leaves are used to make a delicious soup cooked with onions, tomatoes and often some friend fish. The powdered form of moringa is sold as a superfood in places like Holland and Barret in Europe.

9. It is said that the reknown pirate Olivier le Vasseur, otherwise known as La Buse, buried his biggest loot of treasure, coincidentally the biggest loot in pirate history, on the main island of Mahe, to the estimated sum of $1.4 billion. To this day however, no such treasure has been discovered

10. The Aldabra Atoll, one of the wonders of the Seychelles Islands, is home to one of the world’s largest species of tortoises on the planet. You’ll find one of the largest and thought to be the second oldest tortoise in the world on Bird Island; Esmeralda (who’s actually male) weighs almost 300kg and is around 170 years old 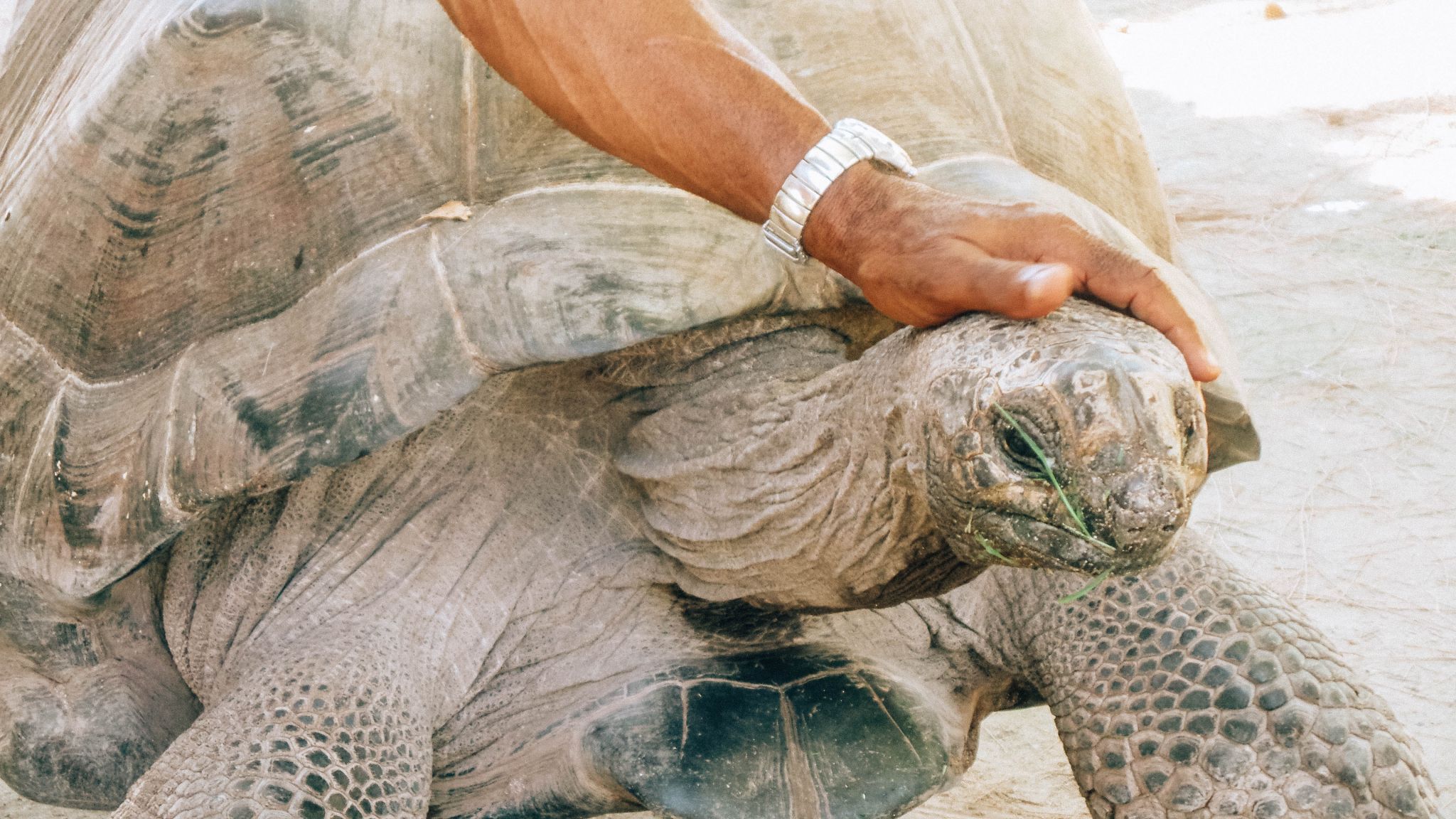 12. Many visitors often haven’t heard of the breadfruit, a fruit that’s very popular in local Creole culture. It can be used in deserts such as ladob cooked in coconut milk or simply grilled on the bbq and eaten with some butter and grilled fish

13. The Seychelles is almost 99% water and it has one of the richest aquatic ecosystems on the planet

14. Famous dishes of the Seychelles include fruit bat curry, coconut curry made with the skin of the head of a shark (kari koko lapo latet reken), grilled fish in banana leaves with onion and tomato sauce, rougai sosis (sausages cooked in a spicey tomato sauce), octopus curry and all manner of fruit and vegetable chutney

15.  The capital of the islands is Victoria which is about 20 square kilometers, making it one of the smallest capitals in the world

16. The majority of the country’s 116 islands are uninhabited and most are kept as nature reserves. The islands are classified into 42 inner granitic islands and 73 outer coralline islands

17. The islands have offered inspiration to many authors and artists including James Bond writer Ian Fleming in 1958. It’s similarly been visited by many famous actors such as Omar Sharif and singers such as Elton John. The Prince and Princess of Cambridge even spent their honeymoon on the resort on North Island

18. The average temperature in the Seychelles fluctuates between 25 and 32 degrees Celsius giving it a tropical rainforest climate with a rainy and a dry season

19.  Some of the most iconic plants of the islands apart from the Coco de Mer is the Seychelles pitcher plant and the « Bois Meduse » ( the jellyfish plant in English)

20. We produce our own top quality rum on the islands, at a site on the south of the main island of Mahe, the La Plaine St Andre distillery. Takamaka rum comes in over 5 flavours including dark, spiced, coconut, tropical and white rum

21. The clock tower in the capital town of Victoria stands as a replica of the little Ben clock tower in Victoria in London, having been brought in in 1903 to mark the Diamond Jubilee of Queen Victoria – at that time, the Seychelles was a British colony 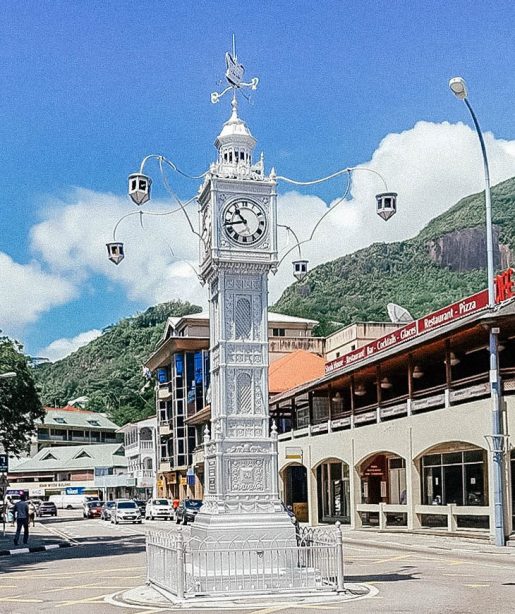 22.  Some fascinating birds, insects and creepy crawlies you may want to keep your eye out for are the endemic leaf insect and stick insect (although they may be camouflaged!), the (harmless) garden snakes, the blue pigeons, the exotic fruit bat, the scoops owl and the black parrot (endangered and found only on Praslin)

23.  The island of St Anne, about a 15 minute boat ride from Mahe, was historically set up as a center for whaling in the early 19th century. With a rapid decline in the popularity of and movements against sperm whale oil, the site was closed down by 1915

24. The country is making progress in the field of sustainability, having banned the use and sale of single plastic straws in June of 2019 (find out more about what you can do to live a more encourage sustainable living!)

25. The main marketplace in Victoria is the Selwyn Swelwyn Clark market which is THE local market to visit for handmade crafts and souvenirs or to buy fresh local produce and freshly caught fish 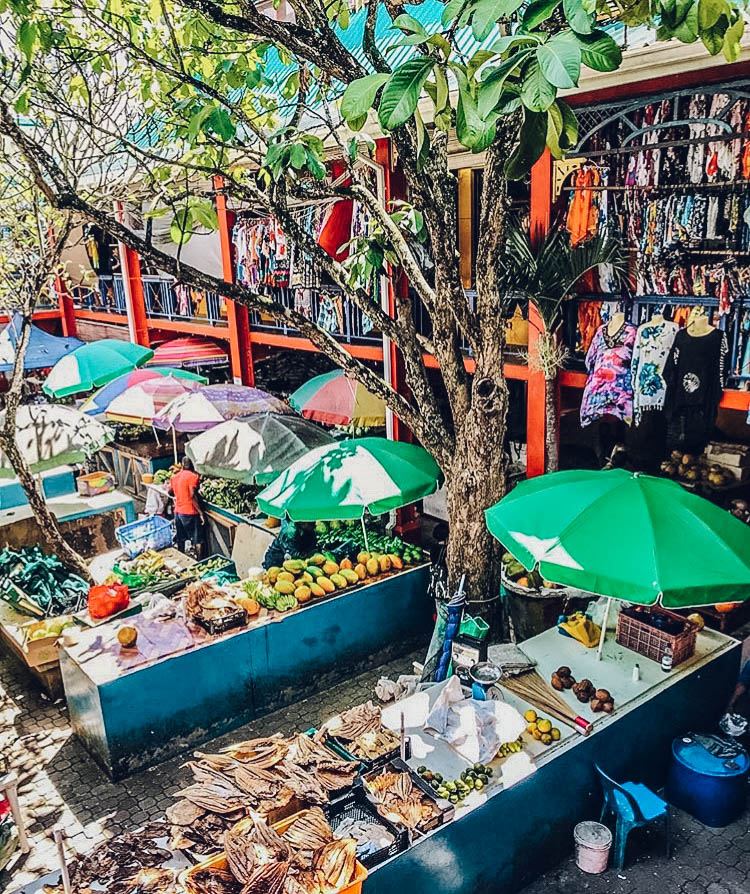 26. The highest peak of the island is the Morne Seychellois mist forest which makes for a fantastic hike and opportunity to discover the islands unique flora and fauna

27. According to history, the Seychelles Islands were first discovered by the explorer Vasco Da Gama in 1502, but early Arab maps have depictions and tales of what could be the islands as far back as 851 AD

28. The Seychelles has some of the most beautiful beaches in the world. Anse Source D’Argent, Grand Anse and Anse Coco on La Digue Island, Anse Georgette and Anse Lazio on Praslin and Beau Vallon, Petite Anse and Anse Louis on Mahe Island

29. A local species of small crocodile or caimans used to inhabit the islands but have been extinct for many years after they were all hunted

30. The islands of Moyenne, 20 minutes from Mahe, is said to be haunted by ghosts of pirates guarding their ancient treasures. Visiting the island and its haunted sites makes for a fun holiday activity!

31. Curieuse Island, about 52 km from Mahe islands, was a leper colony from 1829 to 1965 and today when you visit the island you can see the old sites and the Doctor’s House

32. Every year in September there’s a big beach event known as the Regatta on the popular Beau Vallon Beach where water sports enthusiasts take part in activities like sailing and kayaking. There’s a big lottery that’s run and a fabulous beach party that lasts all weekend

33. The Seychelles holds a Festival Kreol every year in October to celebrate the rich and diverse creole culture

34. The islands are a haven for deep sea divers and snorkeling with an extensive variety of fish and aquatic life. Beaches such as the St Anne Marine National Park are perfect for a day of snorkeling in the turquoise waters. Best diving spots Seychelles include around the main islands of Mahe, Praslin and La Digue but also closer to some of the outer islands. For more about diving in the Seychelles check out this page.

36. Every two years the islands hosts the Carnival International de Victoria which hosts performers and artists from the best carnivals in the world for a full weekend of fun and parties

37. The islands exports vanilla, coconuts, coconut oil, fish and cinnamon and major part of its economy is focused on tourism

38. Very few houses today retain the traditional colonial style but it’s worth visiting Jardin du Roi, one of the beautiful botanical gardens on Mahe island or La Plaine st Andre which is also a top restaurant and the location of the Takamaka rum distillery.

39. The National History Museum on Mahe island is where you can go to learn everything about the country’s rich history as well as view fascinating artifacts and works of art from throughout the years

40. The Seychelles flag is made up of 5 colours each representing an element of the islands. Blue is for the sky and the sea, yellow is for the sun which gives light and life, red symbolizes the people, their unity and love, while the white band represents social justice and harmony. Finally, green depicts the land and natural environment. 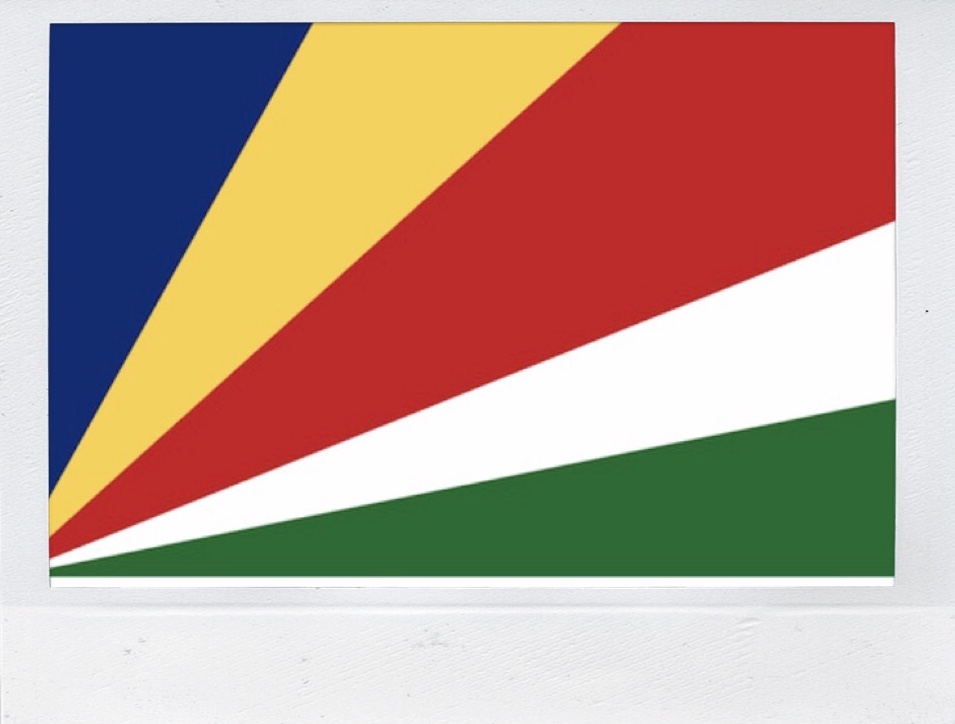 Got any questions about the Seychelles Islands? I’ll be more than happy to answer them! Feel free to ask them in the comments or head over to my Instagram page and interact with me there!

Head on over to my main page for all your Seychelles Guides!